Hi everyone, this is Emilie, your NFFE 1998 Communicator. Two ideas I have recently been in the back of my mind over the past few months is “it could be worse,” and “it should be so much better.”

Background: In the 1870’s and 1880’s a large number of Europeans and Chinese immigrated to the US. The majority of these new arrivals were fleeing financial and economic hardship. During these decades industrialization was transforming workplaces into a more mechanized environment. Jobs that required specialized training and special skills, that were paid more, were being replaced my mechanization. That resulted in more lower paid, less skilled jobs. 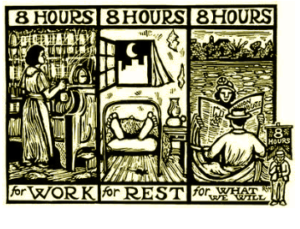 Additionally, workers were often required to work 10-12 hour shifts, with no overtime, and worked 6 days a week. Some factory shift work even had 16 hour shifts. Nationwide, laborers spent decades trying to lower the number of hours worked per day to 8 hours. The 8 hour movement pushed for 8 hours work, 8 hours rest, 8 hours recreation. 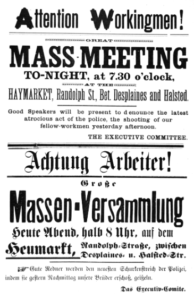 Chicago was a city experiencing massive changes in the workforce due to industrialization. Days were long, wages were decreasing. Chicago laborers were protesting, demanding for the right to unionize, and demanding an 8 hour work day.

On May 3rd, 1886, police officers killed several protesting workers at the McCormick Reaper Plant in Chicago.   Labor organizers called for a meeting at Haymarket Square the following day. Then on May 4th, when police moved in to shut down the rally, and someone threw a bomb at the police, killing seven officers. There were no real suspects, and no evidence for who had thrown the bomb, but 8 men were arrested, 4 of whom were sentenced to death. The way the men were arrested and sentenced without evidence caused public backlash, and the men became martyrs. The Haymarket Riot is associated with May Day and the international struggle for workers’ rights.

In conclusion, I’m thankful our labor struggles are non-violent. I value our ability to have civil conversations, hold management accountable, and come to agreements without the use of force. I’m also very aware that if we don’t continue to work to understand our rights, and continue to hold management accountable to our rights, that we could lose them. The contract has been repeatedly breached by management and it is everyone’s responsibility as bargaining unit employees to report these occurrences to our union so we can take actions to prevent future contract violations and work to reverse the harm done against us.